The Rocketek RT-SCR10 is one of the most reliable of the CAC card readers. Many military personnel already use this card reader since many commands carry them and use them for portable computers.

That being said, this is not a permanent placement type CAC reader as compared to others in the industry. It doesn’t have a strong stand like permanent fixtures.

However, it’s my personal belief that readers like the Rocketek RT-SCR10 are sort of the best of both worlds in that it can sit prominently on your desk but is easy to pick up and go if need be. 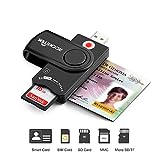 Although Rocketek RT-SCR10 is one of the most prominently used CAC readers, there are still some very important questions to be answered so as to make sure it will allow you to use it with your system without the hassle.

What is It Compatible with?

Rocketek RT-SCR10 works on Windows, Mac, and Linux. However, depending on the level of your operating systems, you many need to install a driver. To use your CAC with your computer, you’ll still need to download the appropriate drivers (in some cases) as well as the necessary DOD certificates.

Do I need to Install a Driver for this to Use with My CAC?

Normally, no, so long as your computer has an updated operating system, drivers should be able to recognize the CAC reader. If you do have to install or update your drivers, this article will help you do just that. There are a couple of reviews on Amazon that state that the CAC reader didn’t work for them, and I strongly believe this was because the person didn’t have the right certs or drivers in place.

We are a participant in the Amazon Services LLC Associates Program, an affiliate advertising program designed to provide a means for us to earn fees by linking to Amazon.com and affiliated sites.

Looking For Something Specific?

Scroll back to top